Never use a candle as a heater 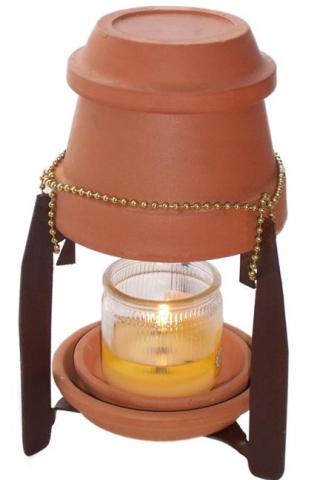 I recently saw the item in the picture above online as a method for using a candle to heat up the room you are in.  The product is called the Kandle Heeter and can be found here.  There are 2 reasons this product is silly.

1.) The product above would only slow down the heat that enters the room.  Imaging the ceramic pots as sponges that absorb the heat and then release it more slowly than it would have entered the room.

The wikipedia article on candle says that "Based on measurements of a taper-type, paraffin wax candle, a modern candle typically burns at a steady rate of about 0.1 g/min, releasing heat at roughly 80 W".  Because I'm sure you're cautious about everything you read on Wikipedia, you can follow the footnote after the quote above to this paper titled "Characterization of Candle Flames" by authors from the National Institute of Standards and Technology.  In the paper, they state about their candle: "heat release rate was based on the average measured mass burning rate of the candle (0.105g/min), the heat of combustion value measured in cone calorimeter experiments (43.8kJ/g)".  The paper also reference the gross heat of combustion for parafin wax, which is 46.2 kJ/g.  When you multiply 46.2 x 1000 (to convert to grams) x .105 (grams/min) x 60 (mins/s) you get 80.85 J/s, which equals 80.85 W.  So 80 W for a candle is a good number. However, the combustion efficiency of a candle is not 100%, and the paper actually states the combustion efficiency at 96-97%...so the heat produced by a candle will be slightly less than 80W, but I'll stick with 80W to be conservative.

Therefore, if a human produces about as much as a candle, can you imagine trying to heat a room by bringing another person into it?  Surely you've been in a very crowded room and noticed the temperature rise, but how many people had to be in that room?  You would need many candles to make a meaningful impact in a cold room.

But that only addresses the issue of whether a candle can even create enough heat to heat a room, which it can't.  If it could, would the device pictures above make an impact?  Only if you wanted to heat the room slower, which would defeat the purpose of trying to heat it to begin with?