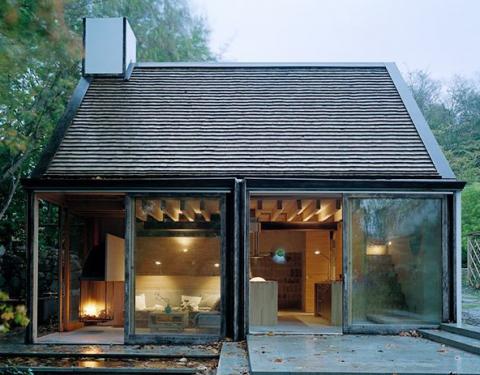 Way back in 2010 we put up the post on 10 steps to build a zero net energy home.  We figure it was time for an update!  For the pic above to be zero net energy, it probably needs solar panels on the othe side of the roof and I hope the glass doors are double (or triple!) pane, but we hey, we liked the picture.  The following guest post was written by Brandon Engel.  You should follow him at @BrandonEngel2.

As consumers are becoming increasingly conscientious about reducing their carbon footprint, and the the state of the economy is forcing most homeowners to reconsider the sustainability of their day to day habits, we’re seeing more and more interest in “zero net energy” homes - houses which produce more energy than they use, and emit no carbon annually.

The idea is that while homeowners will typically pay a small fee to the utility company to stay on the grid (commonly in the ballpark of $10 a month), zero other energy expenses will be incurred annually, and what’s more, homeowners might even be able to monetize their surplus energy by selling some back to the grid (mapawatt note: this is commonly referred to as net-metering).

There’s been a lot of discussion in the mainstream press about zero net housing recently, too. The humanitarian organization Habitat for Humanity just built one for underprivileged occupants. It’s an application of technology that stands to benefit the environment, and homeowners at all income levels.

If you’ve been thinking about building your own zero net home, and would like to see dramatic reduction of your carbon footprint by the end of the year, here are a few practical tips for getting started.

The first thing you’ll want to look into are tax incentives (such as those offered in Colorado). Ultimately, you’re looking to save a tremendous amount of money in the long run if you build a zero net home, but what’s better is that you may not even have to foot the bill for all of the initial hardware/installation. In most states throughout the U.S.,  there are federal and state subsidies that you might be able to use to partially finance your build. If you purchase and install photovoltaic panels, for instance, you could be eligible for as much as a 30% federal tax incentive. If you are investing in having a property built right now anyways, the difference in the initial overhead could be quite negligible - especially if you account for the tax incentives, rebates, and, of course, the fact that you will not incur any other annual energy expenses.

Once you have your budget laid out, the next step is building the envelope. Just remember: insulation is key. You want to retain heat in the winter, and you don’t want excess heat finding its way into the house during the summer. You’ll want sizeable studs for your wall, potentially as big as 2” by 6”, just to achieve optimum insulation within the wall cavity itself. The next step, then, is plywood sheathing around the wood panels, and a plastic air/moisture barrier to cover the entire house, from the foundations to the exterior walls to the rooftop itself. After that, everything should be covered in up to four inches of Polyiso plastic foam. Then the roof itself will need a little more attention: it’s best to further insulate it with plywood insulating foam composite, to ensure that the house will seal heat. Another thing you’ll want to be mindful of is your duct work. Make sure that all the ducts in the house have been taped and sealed to ensure that they are air-tight.

Of course, let’s not forget one of the most important steps of all, a source for renewable power. You want your house to feed off of power sources which are entirely renewable. Obviously, this eliminates gas and oil. What you want is something that will generate electricity in a way that does minimal harm to the environment. The logistics of your plan will have to depend largely on the conditions of the land surrounding your property. In certain areas, solar panels and wind turbine power generators are a viable solution. Photovoltaic panelling can be installed on the roof of your property, or on a two-axis tracker set-up near your home. A ground-source heat pump may make sense for certain homes, but they certainly don’t work universally (especially not in a leaky house) however this could be the best alternative for anyone living in a particularly cold climate. Location is always critical, and while solar and wind turbine power might make the most sense for some owners, others will have to rely on other sources of clean energy. Thankfully, there are companies who provide efficient energy in certain regions. For instance, people living in Illinois might try Choose Energy , while residents of Texas might consult TexasElectricityProviders.com.

One of the most pressing issues for consumers is knowing how much power is actually needed to run a home with reasonable amenities, and what sort of power you’ll need to produce via solar, wind, or geothermal energy to keep your house operational. Residents of the U.S. have an average of about 110 volts fed into their homes off the main grid. This power can be augmented by solar panels which absorb DC power from the sun, convert it into AC power using inverters, and pump that energy either back into the house are a bank of back-up batteries which store power for emergencies. Another approach is to simply have the solar panels connected to the inverter, with the power being pumped directly back into the house.

And how much power can you expect to harness from, say, solar panels? South African vlogger Martin Lorton, for instance, says that he has a 2,250 watt solar panel array on the roof. He says that, on a sunny spring day, he generates in the ballpark of 13 KWH of energy. On an overcast day, he might generate closer to 7 kwh. Lorton recommends using special monitoring software, so that you can accurately gauge the efficiency of your solar panels throughout the course of the year.  Some experts are going as far as to say that you could use 60% less energy than you would with propane (and you know how much of a carbon footprint propane leaves behind). (mapawatt note: if you're new to solar, check out our Residential Solar PV educational post).

So, zero net housing could perfectly suitable for occupants, as long as they are diligent about monitoring their power supply and are conscious of how their systems faire in different weather conditions. Homeowners can now enjoy greater levels of autonomy than ever before, and save money while reducing the amount of pollutants they release into the world. Perhaps in a few decades time, zero-net houses will become the standard. Just imagine the benefits that could yield, not only for our bank accounts, but for the very earth itself…