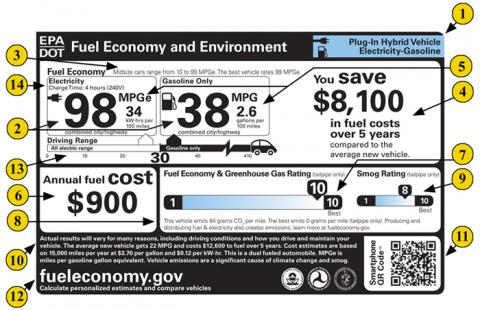 Most drivers know what miles-per-gallon (MPG) is for a traditional gasoline, diesel, or other liquid powered vehicles. With plug-in hybrids, it’s a bit more challenging, because they are powered by both electricity and gasoline.

One of the best explanations on the web explaining how to read this sticker is the one who produces it, fueleconomy.gov for plug-in hybrids.

There is a lot of great information on this site, but the biggest difference between a plug-in hybrid’s sticker and a normal fossil fuel sticker is the addition of an MPGe rating (miles-per-gallon equivalent).  They explain MPGe as:

"The left-hand fuel economy box on the label displays the fuel economy when operating on electricity. This is described in miles per gallon of gasoline-equivalent (MPGe). Think of this as being similar to MPG, but instead of presenting miles per gallon of the vehicle’s fuel type, it represents the number of miles the vehicle can go using a quantity of fuel with the same energy content as a gallon of gasoline."

And from Wikipedia on the topic of MPGe:

The ratings are based on EPA’s formula, in which 33.7 kilowatt hours of electricity is equivalent to one gallon of gasoline

If you look at the image at the top of the post, you see two numbers in each box in the top left corner.  These are:

These numbers are related to each other.  If you divide 100 by the bigger number in the box, you get the smaller number!  FuelEconomy feels it is important to add the value per 100 miles because:

"While a miles per gallon (MPG) estimate is a required feature that has appeared on the fuel economy label for several decades, this metric can be potentially misleading when consumers compare fuel economy improvements, particularly when they use it in place of fuel costs.  The following chart shows the non-linear relationship between gallons used over a given distance and miles per gallon.  The fuel savings, in gallons, for a vehicle that gets 10 MPG versus a vehicle that gets 15 MPG is about 33 gallons (assuming 1000 miles). On the other hand, the fuel savings in gallons, for the same 5 MPG fuel economy jump, for a 30 MPG versus a 35 MPG vehicle is only about 5 gallons."

Which can bee seen in the image below seen on their website:

In other words, if you’re comparing two cars by their mileage (in MPG or MPGe), you shouldn’t subtract their difference (“eh, 10 MPG vs. 15 MPG is only 5 MPG different, no big deal”), you should divide them to see a percentage increase or decrease (“wow, a 10 MPG vehicle uses 50% more energy than a 15 MPG vehicle to go the same distance!”)

Of course, if you’re buying a car that plugs-in, chances are you will be curious as to how far you can go on just electricity (i.e. battery power) alone.  This is the all-electric driving range shown by arrow 13 in the image at the top of the post (but kind of small and sandwiched in some of the other values).

Good choice for me?

What is Watts per kilogram?
The Perils of Home Automation
Moving towards zero net energy home - 2014 edition
Google back in the Home Energy Game
Sustainable Flooring Options

Residential Solar PV Installation
What is a Home Energy Audit?
What is HERS rating?
Plug-in hybrid mileage
What is a therm?